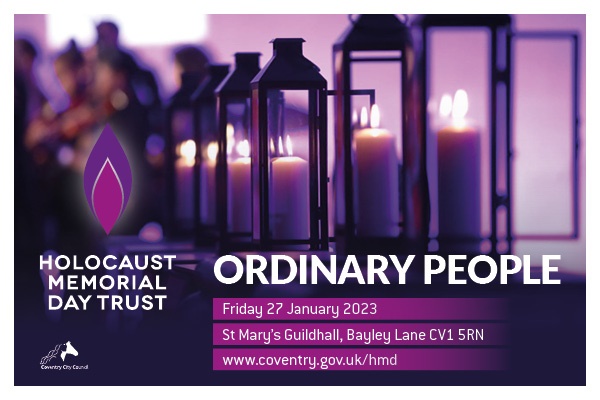 Holocaust Memorial Day is an international event that takes place every year on 27 January to remember the six million Jews murdered during the Holocaust, alongside the millions of other people killed under Nazi Persecution and in genocides that followed in Cambodia, Rwanda, Bosnia and Darfur.

27 January marks the anniversary of the liberation of Auschwitz-Birkenau, the largest Nazi death camp.

Holocaust Memorial Day was founded 23 years ago, when 46 governments committed to preserving the memory of those who died in the Holocaust. It is a day when we remember those who lost their lives during those dark times and subsequent genocides around the world and we tell their stories to make sure they are never forgotten. But it is also a day when we look at our world today and the world we want it to be in the years ahead.

The theme for this year in Coventry is Ordinary People.

The international theme of this year’s Holocaust Memorial Day is “Home and Belonging”. See this page for more about this.