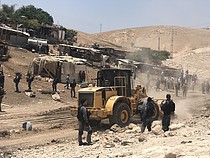 Have just heard that the Israeli Military have closed off Khan al Ahmar village and are not letting anyone in – but are taking in more demolition equipment.

This morning I  have just had phone conversation with a friend in Palestine about the general situation and in particular about the imminent demolition of the Tire School and the village of Khan al Ahmar.

The feeling in the West Bank is that it is very scary and there is no hope of anything good happening. they feel it is ‘Game Over’.

The clearance of Area C, which is under Israeli Military Control, and the largest part of the West Bank, is a long held plan to create an Israeli settlement corridor (E1) from Jerusalem to Jericho and cut the West Bank in two. Israel has already given ‘permission’ for hundreds more settlement homes and infrastructure to be built – all illegal under international law.

In the Jordan Valley and the E1 corridor (Greater Jerusalem) there are 8,000 Palestinians, all targeted for forced removal by Israel.

Daily demolitions take place to increase ‘Greater Jerusalem’ so that it will be 10% of the West Bank area.

The Tire School is in the Jahalin Bedouin village of Khan al Ahmar and is the largest of the Jahalin communities. Another of their villages has had 12 structures demolished in the last few days. Once Khan al Ahmar goes, it is clear that the other 8 will follow and so forcibly clear the families from both sides of the Jerusalem to Jericho Road.

The Tire School is the largest space in the village and the large group of solidarity activists have been sheltering there overnight. This morning the Israeli Military, in a show of force, surrounded the school and put it under temporary siege.

they have also moved in more machinery and are defying the Israeli Court Order for a temporary reprieve. They have said they intend the demolish in the next couple of days.

They have prepared 2 sites – one of which is a concreted over rubbish dump – and intend to forcibly remove the families to them.

MEANWHILE: despite the fact they they know all about Israel’s long term plan, the UK government along with most others, are saying it is wrong BUT DOING NOTHING.

The only church to speak out has been the Church of Scotland – the rest are totally silent in the face of inhumanity and injustice in the ‘Holy land’!

PLEASE: NO MATTER HOW MUCH YOU HAVE ALREADY DONE: contact your MPs, MEPs, other elected representatives, your church leaders. Keep them up to date with what is happening – from the posts on Face book – and ask them to condemn this action by Israel and to take action until Israel complies with international law and stops denying fundamental human rights to Palestinians.